Discover the world with us!

Altar painting ‘Christ with a goblet’ was restored in the time period from 8.06.2017 to 6.06.2018. The painting was made in 1871, the author of it is unknown. The restoration works were lead by Zane Stikāne, the master restorer, and it was sponsored by VKKF and Ludza Lutheran community. Over the time the painting had been severely damaged, the bottom half almost completely torn off, it was pierced through, sliced, suffered from humidity, and the canvas itself became very fragile.

The painting depicts Jesus Christ praying in the Gethsemane garden, the plot connecting it to the night after the Last Supper, when Jesus with his pupils went to the Gethsemane Garden to pray for the last time and to reinforce his faith before the difficult trial. The painting shows us a scene where Jesus is kneeling while praying, his face and eyes are full of despair, sadness and suffering, but in the same time utter submission to the God’s will.

Ludza Museum on Regional Studies have been keeping the painting for 69 years. Before that, it was located in the altar of Ludza Lutheran church. In 1947, the local authorities expropriated the building from the Litheran community and organised there a regional studies museum, later – a sports hall. To preserve the painting, it was handed to the museum. The Lutheran community regained its church in 1994, and in 2018, the painting has returned to the church’s altar, where it rightfully belongs. 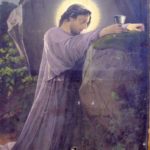