Discover the world with us!

The Big Ludza synagogue, considering the amount of its authentic wooden details, can be called the oldest synagogue in Latvia and other Baltic countries. Wooden synagogues (the one in Ludza was built circa 1800, the one in Rezekne – in 1845) are unique monuments of Jewish culture in North-East Europe that in other European regions were lost during the 20th century. It is supposed that in 700 years in Eastern Europe were built about 700 synagogues. But the number of remaining wooden synagogues in Europe doesn’t exceed 4 or 5. 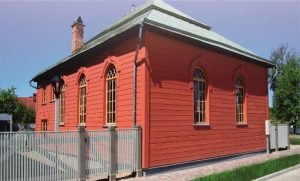 In the third quarter of the 19th century, when synagogue building began to develop technical promblems, it was lined with a layer of bricks. The Big synagogue is one of those few buildings that survived the big Ludza fire of 1938 when most of the city center burnt down. Synagogue building was used as a temple until the 1980s. It maintained its original shape and form, its architectonic composition of the facade, wooden structural frame and the authentic room layout (anteroom, praying room, separate praying room for women, storeroom (a rrom for studying sacral texts)). Intact were preserved also all the main furniture and decorative elements that present Jewish culture of the 18th and 19th centuries: a bimah with a reading desk, Aron Kodesh where Torah scroll was kept, various reading desks, writing desks and benches.

In november of 2013 the Big Ludza synagogue was included into the list of Latvian cultural monuments as a unique landmark and a part of Ludza historical centre – a monument of urban planning.

In late 2014 Ludza district municipality began the implementation of a project – “Restoration of the Big Ludza synagogue and renewal of Jewish religious heritage”. The main activities were: resoration of the synagogue building, creation of expositions, craftsmen training, and exchanging experience with the partners – Hordaland museum center (Norway). During the collaboration wood examples were prepared for debdrochronological analysis. It was found that they most recent wood used in the synagogue dates back to 1781, which confirmed and specified the age of the synagogue, as well as amplified the building’s historical value. 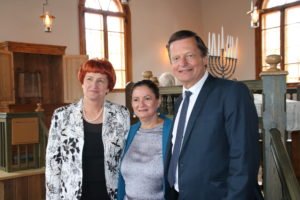 January of 2016. The building’s base was fortified, outer walls were restored but the red brick lining taken down. Log walls were lined with wood planks, for the wood part of the facade were used a primer and a paint made of first cold press linseed oil. The historical tin-plated roof that was brought from Australia in 1930s was renovated and painted. The roof’s wooden structure was fortified. Staircase was dismantled, a new foundation was built, and, using the recovered parts, the staircase was rebuilt. New window frames were renovated or built after the example. The doors and the wooden flooring were restored on the second floor. In the anterrom a new floor was made from the dismantled facade wall bricks. The first floor was given a new wooden flooring and three stoves were built. The historical inside wall plastering was preserved (for about 65 %) and the paint layers on it was strengthed. The unique wooden cupola was also restored – the only one left in Baltic region.